Cranmore: home of the Tuck Turn

The 2013 Eastern Cup Series made a stop at Cranmore this past Sunday for a nice little slalom following the Bates carnival. It was a wonderful race... but folks, you know nothing of East Coast racing until you've experienced the Cranmore Super G.

It begins just off the top of the quad, an artificial ramp that is the White Mountain's closest imitation of Middlebury. Racers traverse a workroad, make three turns on the "pitch", dodge some lift towers, than it's Tuck Turn City baby. Skiers cruise for so long they make Florida Georgia Line jealous.
The top step of the podium was perennially occupied by Tom Bobotas. He finished puberty before Clinton's second term, and had 70lbs on every other poor soul in the NHARA speed circuit. Gotta love those subbie USSA points. 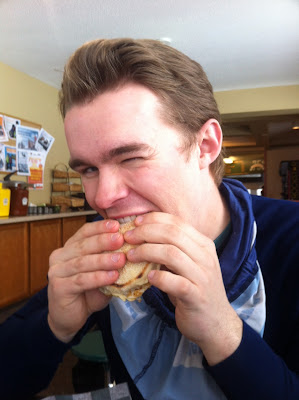 The cafeteria wait was long, the english muffin was enormous, and McNealus won by too much for anyone to score. Requests for prints of this photo, signed by American Mob, should be sent to theamericanmob@gmail.com